An good understanding of Baseball rules are recommended to play Cardball.

————
The card positioning in Card Baseball: 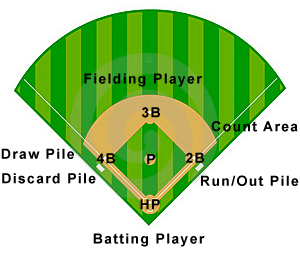 (Actual positions of ‘Piles’ can be altered to adjust to your playing area, although the Base positions and Pitcher positions should emulate a Baseball Field)

Card Values in Cardball are from Ace (lowest value) to King (highest value), However an Ace has a Higher Value than a King, and only a King).

Before the game begins, determine who will bat first, and how many Innings will be played.

When a new batter comes up to the plate, each player ensures that they have seven cards in their hand.

(Note: it is easier if each player to continues holding their card while face down).

The Batting Player then has one option to:

After the Batting Player makes their choice the Fielding Player reveals their Pitching Card.

If the Batting Player chose to: 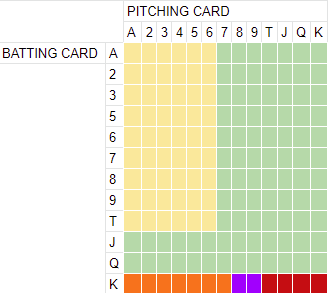 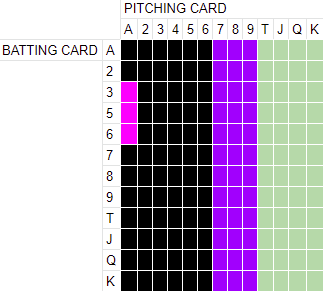 After each pitch, The Fielding Player places their Pitching Card into the Discard Pile.

The Batting Player can declare a “Sacrifice” just prior to revealing their Batting Card.

The Batting Card is out. Any runners may also advance one base, at the risk of a Throw Out each.

When a Fly Ball is hit, the Fielding Player can catch the ball for an Out by playing any card from their hand onto the Field of the Same Suit and of a Higher Value than the Batting Card.
If a ball is not caught it is a Base Hit.
If a ball is Caught – The Fielding Player may then choose to Advance Runners 1 base at the risk of each runner being Thrown Out.

When a Pitch results in a Ball or Strike, the Batting player may choose to Steal.

If hitting a ball results in a “Base Hit”, “Double”, or “Triple”, the Batting player may advance the cards around the diamond accordingly – typical baseball rules apply eg. you advance optionally unless forced to do so etc.

Note: To avoid being thrown out (see below) – the Batting player can choose to not advance runners their full distance if not forced to do so.

For example, a batter hitting a double, can advance all runners only one base to prevent any runner being thrown out.
Or after a base hit, a runner on 2nd base isn’t forced to run – and doesn’t run – cannot be thrown out.

The Fielding Player may attempt to Throw out up to 3 runners for a “Base Hit“,  2 Runners for a “Double hit”, and 1 runner for a “Triple Hit” or “Fly Ball”.

Any Runner Thrown Out in this way is placed onto the Out Pile.

After the batting player has advanced their runners – The Fielding Player can now Throw Out any runners that advanced – by placing a card of the Same suit of a Higher Value from their hand onto these runners (including one card on Home Plate.) for  outs.

(Note that cards ending up on Home Plate are placed on Home Plate, and only counted as a run after the fielding player exhausts all Throw Out opportunities.

Note: Ace can be played on King as a higher card.

The Batting Player can cancel one Throw Out attempt – by playing a higher value “Slide” Card of the Same Suit as the Throw Out Card onto one Throw Out card.
The “Throw Out” Card now replaces the runner card (place the old Runner Card, and Slide Card into the Discard Pile.)

Note: Ace can be played on Kings as a higher card, it then becomes the lowest card.

Once all runner advancements and throw outs are resolved – or after Strike Out, or Ball Caught – Each player draws cards until they have seven in their hand, and play moves on to the next pitch.

End of an Innings

When there are 3 Outs, place all cards currently on the field into the Discard Pile. Players keep their current cards in hand for the change over.

When the Draw Pile is empty. Shuffle the Discard Pile and place face down to become the new Draw Pile.